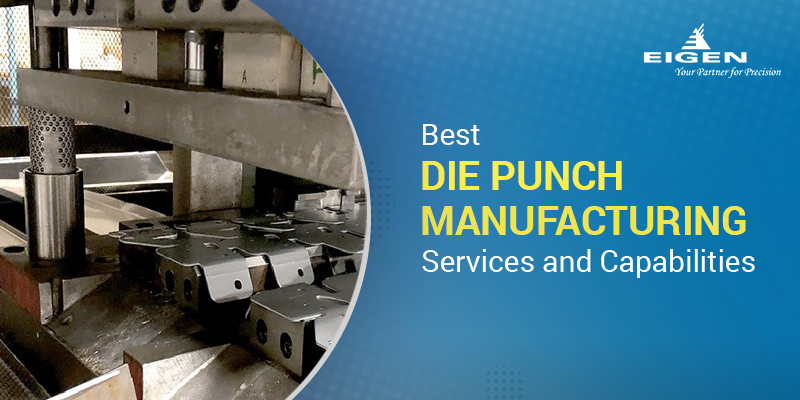 A specialized tool used in manufacturing industries to shape or cut metal is called a Die. The die is mostly used in a press to carry out the job of producing metal parts. Dies work very similar to molds and are customized to the object that needs to be manufactured. A wide range of objects is made with the help of dies. These objects can be simple or even complex. Day to day objects like pins and clips are made using dies, however, complex parts like those used in heavy machinery are also produced using die punch.

Tool and die makers engage in the process of making or forming dies. Once these are produced, they are then mounted into a press to carry out the production of the desired part. Die punch is used to make objects from a variety of materials like sheet metal or even plastic. These days a lot of products are available in transparent plastic containers or blister packs, these are produced using vacuum forming plastic sheets. In the past, vacuum forming was thought to be a simple thermoforming molding action. However, it follows the same principles of die forming. To form automobile body parts, sheet metal is used along with two parts. The first is called a punch and the other is called a die. The punch does the job of stretching, bending and blanking. The die on the other hand performs the task of holding the part to be punched securely and assists in carrying out similar processes of blanking, stretching or bending. The part to be produced essentially passes through many steps with the help of multiple tools and operations before the finished product is manufactured. For automobiles and other complex parts, the objects are trimmed or sheared after the initial part is made. Later additional processes like rolling and crimping are carried out as per the requirement of the final part which should be smooth and free from any sharp edges.

There are several components that form the die punch tool set. The foremost one is called the die which is mounted in a hole block. It is attached to all the other parts and hence is the main part of the die punch mechanism. To hold all the different punches together a punch plate is used which supports these various punches. Next is the blank punch which is responsible to produce the blanked part in partnership with the blank die. The pierce punch together with the pierce die takes off the finished blanked parts. There is a stripper plate which holds the material on the blank or pierce die and also helps in removing the material from the punches. The part called pilot helps put the sheet of material accurately in place for the next process to take place. Since the process of punch and die is a complicated one, it is vital that the material from which the part is being produced is held in place and repeatedly goes back to the same position. This essential function is carried out by what is called a guide and back gauge. While the punch carries out its function of making an impression on the die, care should be taken so that the die does not go in too deep else the material can get damaged rendering the part useless. This task of controlling the depth is done by the setting block which stops the punch from going in too deep within the die. Another important component is the shank which holds the presses as it is aligned to be in line at the center of gravity of the plate.

The process by which die punches are used in manufacturing consists of several steps. These steps are named as per the action that is carried out during the step. To produce a flat piece of metal by cutting the desired shape from sheet metal or other material a blanking die is used. This process is called Blanking. As the name of the die and the process goes so does the name of the part that is produced, it is called a blank. This die can only form the outer part of the object to be produced. Parts that do not require any internal features are manufactured with this type of die. Using a blanking die helps in producing accurate parts with the help of a sharp die having the right distance or clearance between the punch and the die. The final product will surely possess accurate dimensions and have perfect edges. Another benefit of using blanking dies is that the looks of the finished product are much more refined as the whole operation is carried out in one go without the need for several processes to occur on the same part. The finished product also gives uniform flatness, one that is required for further manufacturing actions.

To remove excess material and produce the final product a process called broaching is employed. Several teeth are used to cut the extra material, these teeth are placed one behind the other. Objects that cannot be shaved due to their thickness are usually broached. A bulging die is used to expand the closed end of a tube with assistance from two types of dies. Water or oil is used to expand the part to be made in bulging fluid dies and a rubber pad or block is used in bulging rubber dies. Pressure is used to move the borders of the material from which the part is to be made.

To make different features on either face of the blank a coining die is used in a process called coining. These features are shifted from the face of the die or the punch. The blank is not bent; rather it is squeezed within a confined area by the die and punch. For carrying out multiple operations, compound dies are used. Other steps involved in punch and die manufacturing include curling, cut off, drawing, extruding, forming, horning, hydroforming, piercing, shaving, swaging, trimming etc. 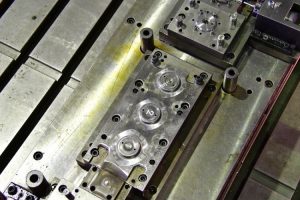 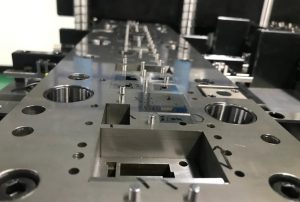 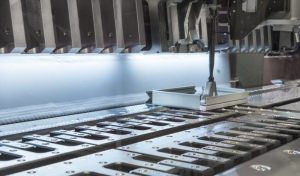